that's what I am. 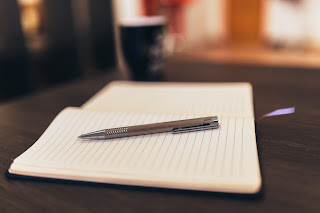 I believe that I am my truest self when I worship and when I write. That is how I was put together, and because God the Creator of all things is the one who created me in my inmost being and knit me together in my mother’s womb (Psalm 139:13), I have to believe that He is the one who designed me this way.

My earliest memory of writing is when I was fascinated by cursive but did not yet know to to read or write it. I remember writing connected loops on a piece of paper and taking it to my older brother and asking hopefully, “Is this cursive?” “No, Lindsay,” he, the older and wiser, responded. I would try a different-looking series of loops and ask again, and again, and still the answer was “no.” My dad was more sympathetic and hesitant to dash my dreams: “Yeeeah… kind of…” We have home video of me when I was maybe 5 years old, sitting with one leg crossed over the other, writing on a tiny notepad in my lap.

My first memory of writing a piece that I was proud of was in second grade when I wrote a poem about Halloween. I remember thinking with surprise and delight that the words just came to me suddenly.

When I was in fifth grade, drawing on the experiences my dad had shared as a social worker, I wrote a fictional story about a girl who discovered that her friend was being abused and assisted her in getting help. My story was so long that my very favorite teacher invited me and a couple of friends to stay after school so I would have time to read it aloud and they could give feedback.

Later, maybe in middle school, I wrote a story called Annie’s Destiny about a young woman who discovers, through an odd journey to a magical place, that her failure as a journalist is an opportunity to fulfill her calling to write children’s books.

In high school, I discovered and fell in love with the classics and found that if I devoured enough books written by the same author, I could start to pick up their voice and style and use it in my own writing. My best friend and I worked on creating a Jane Austen-esque plot for a story we were going to write together. I began writing it but never finished it. I wrote a short story for an English class assignment and wrote it in the style of Mark Twain, who was my obsession at the time. “What a great storyteller you are!” my English teacher wrote in the margin. I knew the style had come from reading so many books written by the master storyteller. My history teacher, in his habit of talking about things that had nothing to do with anything academic, asked the class one day who we would choose if we could be stuck in an elevator with anyone. I chose Mark Twain. My teacher must have thought I was such a weirdo…I guess I was.

When I was in college, I remember writing a poem that was inspired by a friend and showing it to him. He showed it to one of his friends, a person whom my friend seemed to think had some authority on the subject of writing. After reading it, his friend basically said that my poem was nothing special. I am quick to admit that I am a people pleaser and often care too much about what others think. However, I can tell you honestly that when he told me that the poem I had written, that piece of me, was nothing special, I didn’t care. I knew that what I had written was exactly what I wanted to express. I had no idea whether it was “good” or not, but I felt complete peace and satisfaction with it because I knew that it was exactly what I wanted to say.

Being able to say that I have been called to write for Him has been the recent result of a long but accelerating journey. I’ve been afraid to say it out loud because that requires ignoring the voices in my mind that have been telling me that I’m not good enough, mature enough, well enough equipped, old enough, wise enough, and just plain not “enough” to have anything of value to say. I suppose they are right. I’m not enough, and they are right that there are plenty of other successful writers who are more qualified than I am, and many of them are doing a beautiful job of using their gift of communication to share the love of Christ and transforming truth of the Gospel. It’s hard to believe that there is a place for another voice amidst all the noise in the world.

However, I know and believe with all of my heart that the Creator God who made me is more than enough. God, let me live fully and continually aware of the fact that I am not, and never will be, enough, without You. I pray that He will keep my poverty at the forefront of my mind so that I will keep coming back to Him, the only One who can supply all of my needs according to His riches in glory by Christ Jesus (Philippians 4:19). May I throw off false humility and instead be emboldened to share the authentic story of God’s goodness and truth in my life and in the lives of others so that I might do what I was created to do and point others to Jesus.

Not long ago, I watched a movie on Netflix called “That’s What I Am.” It is a great coming of age story set in the 1960’s about a middle school boy who is inspired by a gifted teacher who says, “I’m a teacher; that’s what I am.” As the boy learns to muster up the courage to stand up for others who are mistreated, he finds his own identity and says, “I’m a writer; that’s what I am.”

Here I am, taking my true, imperfect but honest self, and throwing it out there into the world, doing my best to keep my gaze fixed on my heavenly Father as I watch for His direction, equipping, correction, forgiveness, encouragement, and approval.

My name is Lindsay, and I’m a writer. That’s what I am.