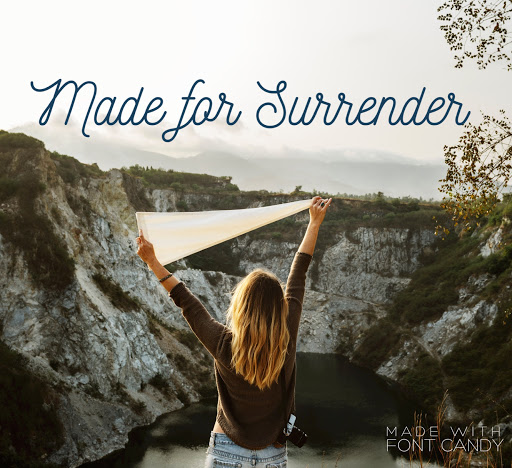 I’ve heard it said that the areas of our lives over which we find ourselves grasping for control are the areas where we feel the most anxious. My tendency to over prepare for any new situation is how I deal with the anxiety of the unknown. However, like many things, God’s wisdom in this matter is the opposite of my human tendencies. Trying harder has never been an effective solution for me spiritually; my coping mechanism of creating the illusion of control actually adds to my anxiety because instead of being present and taking hold of whatever joy is to be had at the moment, I’m busily preparing by thinking of all the things that could potentially go wrong. Paradoxically, I have experienced the greatest peace when I stopped trying so hard and leaned into the strength of the Lord. When we let go of the belief that we can or should be in control, we leave room for the only One who is ever really in control to come and fight our battles for us with perfect wisdom, strength, and goodness. Though we think we want to be in charge, we cannot experience true joy, peace, and fulfillment when we are living for control; we were made for surrender.

Sometimes I want to go back to “past Lindsay” and take hold of her hand and bless her little heart. If I could talk to her, I would gather her up in my lap and say, “Bless your heart, you are so weary from striving. Don’t despise the many weaknesses you see in yourself but lean into His strength. He loves all of you and is infinitely more patient with you than you are with yourself. Let Him do the work that you are trying so hard to do on your own.”

At the end of Joshua 5, after the Israelites obeyed the Lord by circumcising the adult males and then observed the Passover, it was time to prepare for battle. Joshua was near Jericho, where the battle would begin, when he looked up and saw a man dressed for battle, holding a drawn sword. Joshua 5:13-15 says,

Now when Joshua was near Jericho, he looked up and saw a man standing in front of him with a drawn sword in his hand. Joshua went up to him and asked, “Are you for us or for our enemies?”

“Neither,” he replied, “but as commander of the army of the Lord I have now come.” Then Joshua fell facedown to the ground in reverence, and asked him, “What message does my Lord have for his servant?”

The commander of the Lord’s army replied, “Take off your sandals, for the place where you are standing is holy.” And Joshua did so.

I think it is possible that Joshua was simultaneously courageous and in need of reassurance in this passage. The Lord had commanded him to be strong and courageous (Joshua 1:9), and anything He requires of us, He is able and faithful to bring about when we submit to Him. Thus far, Joshua had shown courage in following the Lord’s instructions (including religious observances in the midst of enemy territory) and preparing for battle. Many times when people in the Bible ask God a direct question, His response seems odd to me at first glance. I have come to believe that this is because He listens to whatever is at the heart of our questions, rather than what is on the surface, and speaks directly to what we are really seeking to know. Perhaps Joshua’s question demonstrated both a submission to the Lord’s instructions to be ready for battle as well as a need for reassurance that God was with him. His response to Joshua is a reminder that God is sovereign over all, always on the side of truth and goodness and justice. Instead of inviting Him along to help us as we forge ahead, we do much better follow wherever He leads. He loves us and is for us, but we benefit most when we go beyond inviting Him to be on our side and instead make the decision to be on His.
Joshua’s response (worshiping and asking what the Lord’s message is) shows humility and reverence. As he humbled himself before the commander of the army of the Lord (believed by many to be the preincarnate Jesus), he was told to take off his sandals because he is on holy ground. Holy ground is made holy by the presence of God; this is a reassurance to Joshua that God is with him. The similarity of this instruction to God’s instruction to Moses in the burning bush incident indicates a confirmation that as God was with Moses, so He would be with Joshua. God has such great patience with our fear, doubts, and insecurity. Though He had already called Joshua and given him instructions, He provided the reassurance of His presence on the eve of battle. Perhaps Joshua struggled with feelings of insecurity as the leader of the Israelite army and needed the reminder that the Lord, the greatest and most perfect army general, was the One who was truly in control.
When we humble ourselves before the Lord, we do not turn a blind eye on our weaknesses, nor do we idolize them as being greater than what God can redeem. We allow our faults and imperfections to come to light, trusting that God will work in us and through as just as He said He would. Those He calls, He equips, though the equipping may look different than we would imagine. We are best equipped for spiritual battle when we have relinquished control and come to a place of complete dependence upon the Lord, who was always and rightfully the One in control, in the first place.

Yours, Lord, is the greatness and the power
and the glory and the majesty and the splendor,
for everything in heaven and earth is yours.
Yours, Lord, is the kingdom;
you are exalted as head over all.
Wealth and honor come from you;
you are the ruler of all things.
In your hands are strength and power
to exalt and give strength to all.

One response to “made for surrender”