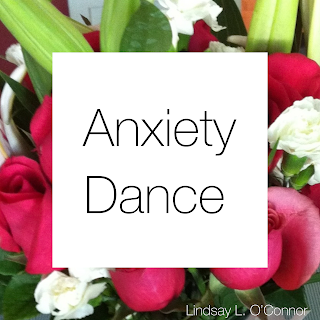 I used to think anxiety was a moral failure,

an indication of a lack of faith.

I thought if I tried hard enough and prayed often enough,

I could send her away,

her departure the reward for my spiritual growth.

Then, do you know,

the more I tried to get rid of her,

the louder she yelled.

My body began to bear the scars

of her violence against me.

when I’d walk away as she threw a tantrum,

would stop, get up, follow me to the next room,

and plunk herself down in front of me

before she resumed her carrying on,

demanding to be dealt with.

Sometimes the best thing to do

was gather her up in my arms,

hoist her onto my hip,

and bring her along everywhere I went,

knowing it would be less efficient,

but better for all parties involved, in the end.

That’s just what Anxiety did.

“You will deal with me!” she yelled through panic attacks.

what about this moment is unsafe?!

She was just as irrational and unpredictable

It occurred to me that maybe

she had something to say.

I began to listen with compassionate,

When my stomach flipped and I felt the impulse to run,

my brain tried in vain to appeal to reason, saying,

When my jaw tightened and I became restless,

I stopped allowing my heart to shame me with

“Why are you like this, after all this time? O ye, of little faith!”

Instead, I knelt down with Anxiety

so we could be face to face.

and thanked her for protecting me.

I invited her to come along

instead of shooing her out the door.

Sometimes when you’re dancing, you take a step back,

not due to incompetence or regression or resignation,

but because it’s just one step in the dance,

one part of the way two partners move together.

When Anxiety alerts my body that all is not well,

I step back and let her have her say.

I hold her close,

remembering that I am myself,

and she is herself,

and we are not each other;

we are simply dance partners.

And then, as we dance,

we consent to each other’s presence,

to being in relationship.

I listen deeply to her wisdom

before gathering her up in my arms,

hoisting her onto my hip,

and bringing her along with me.

Sometimes she takes up a lot of room,

and carrying her around is terribly inefficient,

but she doesn’t scream quite so loudly now.

I find that whenever she gets the attention she needs,

after a while, I can set her down

and she’ll run along and play.